This blog post was first written for and published on 6th November, 2014 by the Sheffield Institute for International Development (SIID) under the ‘Students Insights’ feature of  their website. I am republishing it here without edit but with only the addition of pictures.

I have so far enjoyed my PhD journey which started in September, 2013. Like many other PhD researchers, I am delighted to have had the opportunity to personally choose which research topic I am passionate about. This opportunity comes with the privilege of deciding the country for my case study. The central aim of my research is to critically analyse and explain the specific ways in which key aspects of governance affect the tourism-poverty nexus in Ghana more generally and in the Elmina municipality particularly. As a mainly qualitative research project, the primary methods for my PhD are extensive interviews with tourism policy makers in public, private and civil sectors, analysis of policy documents and some observations.

Over the years, I have done a number of community based fieldwork projects in Ghana. Since I come from Ghana, going for fieldwork there felt partly to me as a homecoming. I have been non-resident in Ghana since 2009, although I have been back on four different occasions ranging from a 4 weeks visit to a 5 months stay. Thus, I had a fair idea of what was in store for me. I tried to prep myself fully for this current fieldwork but nonetheless found myself dreaming of all the great things I was going to do – e.g. doing transcription and writing as well as playing some football – idealist maybe but I was buzzing. I was excited about getting started with the fieldwork phase of my PhD research which was going to last for 3.5 months.

The Waiting Room at the Ministry of Tourism, Culture and Creative Arts

Another area of boredom has been the inability to as yet complete any transcription. The thought of doing transcription at the end of a day of running around chasing for interview appointments is sometimes simply unbearable. What has helped has been the decision to postpone transcription until I am back from fieldwork. The plan is to dedicate 2-2.5 months solely to the ‘boring’ task of transcription.

Ultimately, the biggest boredom that I experience is simply that I feel I am just in waiting – waiting for the fieldwork to be over so I can head into what from here seems an exciting phase of making sense of the interview data. While I do write down the general themes as they emerge, I do not want to get into a place when I get too attached to certain themes even before all interviews are concluded.

The experience of boredom notwithstanding, I have experienced countless instances of joy during my fieldwork. The first of which has been the feeling of homecoming. I was able to arrive on a Friday and already head out for an appointment the following Monday. Being able to see family and meet up with old friends has been a very enjoyable part of my fieldwork. I have also had to opportunity of staying with friends and relatives, on whom I can overload my frustrations after an unproductive day.

The simple pleasure of being able to walk along the beach from one appointment to the other or at the close of day has been great source of joy to me. The fieldwork has given me the opportunity to savour some of the great tourist attractions available in the Central Region of Ghana without having to even pay for the experience. I will not have visited these places if it were not for this fieldwork aspect of my research. Such an idyllic landscape has served to counter the moments of boredom that I face.

Idyllic sunset walk with my bike along the beach in Cape Coast, Ghana

I have also been really pleased with the level of access I have had with the various individuals and institutions I have approached. People have generally been nice and open with me during the interviewing process. Indeed I have had some pleasant conversations at the end of interviews when the voice recorder is put away and I am set to leave the venue of the interview.

The surprising part is that such conversations have been with those who gave strict interview time limit but were willing to spend up to the same amount of time in simple conversation. For instance an official at the Central Regional Coordinating Council Economic Policy Unit could spare only 10 minutes for the interview but we later spent about 10 minutes just talking about where I went to school (her daughter attended the same university I went to for my undergraduate degree), whether I will be returning to Ghana after the PhD and how best the development question in Ghana can be approached. Indeed her statement that “development is a political decision” kept me wondering if this decision has been made in the case of Ghana.

The ultimate source of joy I have encountered has been through the intellectual dialogue and analytic insight from the interviews. On one occasion my interviewee was of the view that the generic term governance and how it affects the tourism sector was not specific enough. He insisted on specifying the various aspects of governance that he felt were responsible for the low level of impact tourism was having on poverty reduction.

My joy from this interview was that it provided me with a new way of looking at my previous interviews. I then began to see new themes emerging from previous interviews that I had earlier thought of as not being interesting enough. What became clear was that I should be looking at the peculiar ways specific aspects of governance affects the tourism-poverty nexus and in which intensity. Such analytic insights in the end assures me that my fieldwork is on track and that I can look forward to the next stage of my PhD – i.e. transcription, analysis and writing up.

One early morning on my way from Cape Coast to Elmina by bicycle, I encountered a beautiful rainbow. These opportunities among others keep reminding me that there is more to enjoy during this fieldwork that to just moan about some of the issues of boredom I encountered. 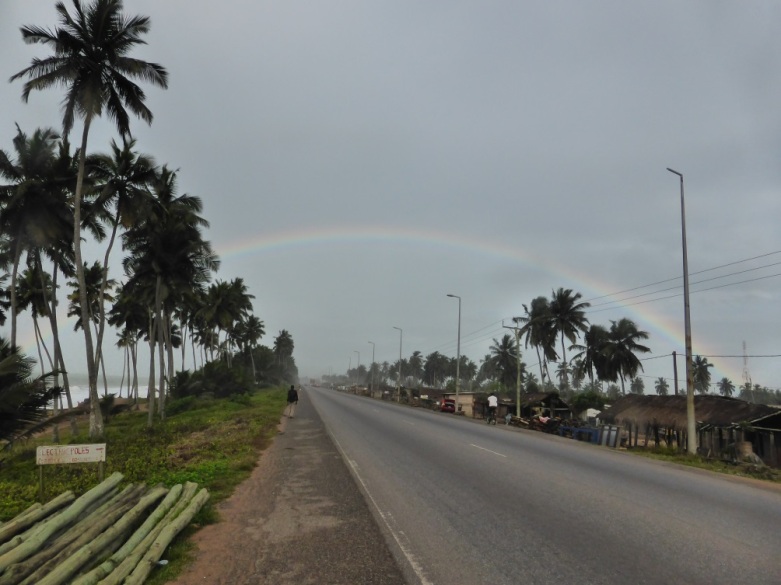 One thought on “The boredom and joys of fieldwork in Ghana”